Barents Sports is a joint project between Norway, Sweden, Finland and Russia aimed at young people aged 15–25 and involving up to 10.000 young adults every year.

The purpose of Barents Sports is for sporting activity to involve as many young people as possible across the borders. It should contribute towards breaking down political, cultural and social barriers.

In terms of sport, the aim is to improve quality across the board. The Barents Cooperation strives to function as a platform for an increased exchange of athletes, coaches and managers to hone expertise and skills, and increase tolerance. Encouraging physical activity for all is also a significant goal.

Norway; the regions of Nordland, Troms and Finnmark.

Russia; the regions of Murmansk, Arkhangelsk and Karelia (and Nenets and the Komi Republic)

The Barents Euro-Arctic Region has a population of more than 6 million and consists of the northern areas of Finland, Sweden and Norway and North-Western Russia. The natural resources of the Barents region are extremely rich and varied. The most significant are the forests, fish, ore and petroleum resources. These natural resources are still mainly unexploited. With its surface area 1,6 million km2, the region is larger than France, Spain and Portugal put together.

The Barents Region is in the Arctic and is characterized by a harsh climate, sparsely populated areas and long distances. The peoples of the various regions involved have maintained contact with each other for thousands of years through trade and cultural contact. In spite of differences in social and economic conditions, the participating regions face many common challenges, for example the fact that they are situated far away from both the capitals of their countries and the large markets, and that the business sector in the region is not very diversified, being mainly based on raw materials.

The Barents Cooperation was established in 1993,   when the Kirkenes Declaration was signed by the foreign ministers of the participating countries and the European Commission. The cooperation is based on two pillars, the national, represented by the centra lgovernment authorities in Moscow, Stockholm, Helsinki and Oslo, and the regional, represented by the county authorities. At the national level is the Barents Council, which consists of ministers, while at the regional level there is the Regional Council, where the members are the governors of the participating counties.The cooperation in sports dates much further back than 1993.

Historical background of the cooperation in sports

The cooperation among people in the Barents Region goes far back in history. With the long distances and poor communications to the southern and more central parts of the respective countries, it felt natural for the sports organizations to build cooperation across the borders in the north.

At a meeting of ”Felleskomiteen” for the Nordic sports organizations in 1950, they agreed on a sports cooperation in the northern parts of Finland, Norway and Sweden, until 1997 named the Calotte cooperation of sports. The formal Cap of the North Cooperation was launched and an agreement between the sports associations in Finland, Norway and Sweden were established. Norway was the driving force in getting things off the ground. Sport in Norway and Finland had a lot of catching up to do after the Second World War. Sweden had both the expertise and the resources to help rebuild the sporting organizations in neighboring countries. Furthermore, north–south communication was both inadequate and time-consuming in all three countries.

In 1960, a bilateral agreement between the sporting organizations of East-Finnmark (later Finnmark Idrettskrets) and the Murmansk region was signed. There are also bilateral agreement between sports organizations in Finland, Russia and Sweden.The agreement related to cross-border sporting cooperation. This was back in the days of the Cold War, but despite a number of minor setbacks, the collaboration has continued right up until the present day. The contact that was established in this way with Russia also served as a model for international cooperation in the Barents region, a collaboration that was established in 1994, when Russia joined as the fourth party in the Cap of the North Cooperation, which changed its name to Barents Cooperation in 1997.

Shortly after the Kirkenes Declaration had been signed in 1993, the sports organization started to work on a strategic plan for a sport cooperation in the region with Russia as full member. In the period fraom 1995 - 1997 one person from each country were working on this plan. At the Calotte Conference in 1997 the name was formally changed to Barents Cooperation.

In addition to the various competitions, the collaboration also includes courses, training camps, seminars, a coach exchange and cooperation at club level. Sport is a huge aspect of people-to-people cooperation in the Barents region. This is why it is extremely satisfying to see that there is now more exchange in the east–west passage than ever before.

Barents Sports has long had a strong link to the Barents Secretariat and its sports programme, which focuses on strengthening the exchange with Russia and Russian sport.

The contact between athletes, trainers and leaders has led to;

–     seminars for leaders and trainers

In 2010, 2011 and 2012 it was not possible to organize any common competitions for the sports due to lack of financing.

Boxing was invited, but could not take place because of few athletes. 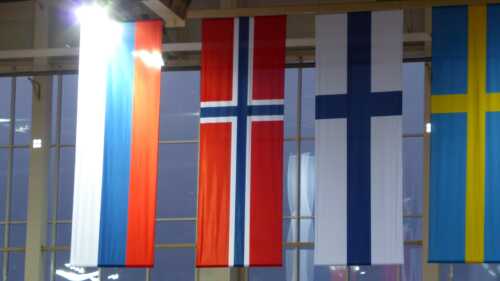